Welcome and thank you for stopping by. Please be aware and advised, this is a CONSERVATIVE BLOG.

Here is some information and my rules:

2) Conservatives have the voice of reason on my blog;

3) I will delete any comments that are abusive, non-related to the “blog theme” and not debated in a civil manner;

4) I welcome input from all walks of life.

However, this is my blog and I will make the “ultimate” decision on any/all comments.

I encourage “civil” discussion. We may not agree on “ideology”.

However, we can agree on “respect” and at least listening to different perspectives.

Thank you for visiting!

The Washington Post reports that U.S. officials suspect Sufian Ben Qumu, an ex-Guantanamo detainee, “played a role in the attack on the American compound in Benghazi, Libya, and are planning to designate the group he leads as a foreign terrorism organization.” Ben Qumu is based in Derna, Libya and runs a branch of Ansar al Sharia headquartered in the city. 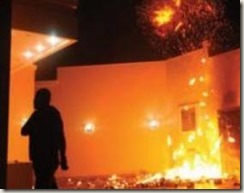 U.S. officials have found that some of Ben Qumu’s militiamen from Derna “participated in the attack” and “were in Benghazi before the attack took place on Sept. 11, 2012.”

Ben Qumu was fingered early on as a suspect in the Benghazi attack, but his name dropped out of much of the reporting on the assault for more than one year.

In November 2013, however, THE WEEKLY STANDARD reported: “U.S. intelligence officials believe that Sufian Ben Qumu, a Libyan ex-Guantánamo detainee, trained some of the jihadists who carried out the attacks in Benghazi.” Ben Qumu, TWS reported, “has longstanding connections with al Qaeda leadership.”

Ben Qumu is one of the original “Arab Afghans” who traveled to Afghanistan to fight the Soviets in the 1980s. In the years that followed the end of the anti-Soviet jihad, Ben Qumu followed al Qaeda to the Sudan and then, in the mid-to-late 1990s, back to Afghanistan and Pakistan. He was eventually arrested in Pakistan after the 9/11 attacks and transferred to the American detention facility at Guantánamo Bay.

A leaked Joint Task Force Guantánamo (JTF-GTMO) threat assessment describes Ben Qumu as an “associate” of Osama bin Laden. JTF-GTMO found that Ben Qumu worked as a driver for a company owned by bin Laden in the Sudan, fought alongside al Qaeda and the Taliban in Afghanistan, and maintained ties to several other well-known al Qaeda leaders. Ben Qumu’s alias was found on the laptop of an al Qaeda operative responsible for overseeing the finances for the September 11, 2001, terrorist attacks. The information on the laptop indicated that Ben Qumu was an al Qaeda “member receiving family support.”

An August 2012 report published by the Library of Congress in conjunction with the Defense Department, titled “Al Qaeda in Libya: a Profile,” identified Ben Qumu as the possible “new face of al Qaeda in Libya despite” his denial of an ongoing al Qaeda role. The report also noted that Ben Qumu and his Ansar al Sharia fighters are “believed to be close to the al Qaeda clandestine network” in Libya. According to the report’s authors, that same network is headed by al Qaeda operatives who report to al Qaeda’s senior leadership in Pakistan, including Ayman al Zawahiri.

The reporting on Ben Qumu’s ties to the Benghazi attack directly refutes an account by David Kirkpatrick of the New York Times. Kirkpatrick reported that “neither Mr. Qumu nor anyone else in Derna appears to have played a significant role in the attack on the American Mission, officials briefed on the investigation and the intelligence said.”

The Post reports that, in addition to Ben Qumu and Ansar al Sharia Derna, the branches of Ansar al Sharia in Benghazi and Tunisia are going to be designated as terrorist organizations by the State Department.

Two other individuals, Ahmed Abu Khattala and Seifallah ben Hassine, are going to be added to the list of “specially designated global terrorists.”

Seifallah Ben Hassine (a.k.a. Abu Iyad al Tunisi) is the head of Ansar al Sharia Tunisia, which assaulted the U.S. Embassy in Tunis just three days after the attack in Benghazi.

In its annual Country Reports on Terrorism, published in May 2013, the State Department noted that Ben Hassine “was implicated as the mastermind behind the September 14 attack on the US Embassy,” which involved “a mob of 2,000 – 3,000” people, “including individuals affiliated with the militant organization Ansar al Sharia.”

The ties between Ben Hassine, Ansar al Sharia and al Qaeda are longstanding and well-established.

The Post’s report concludes: “In addition to Qumu and Khattala, American officials are eager to question Faraj al Chalabi, a Libyan extremist who might have fled the country.”

Thomas Joscelyn is a senior fellow at the Foundation for Defense of Democracies.

News and Opinions From Inside China

PoliticalShort
My Opinion My Vote

The greatest WordPress.com site in all the land!

The ‘red pill’ and its opposite, ‘blue pill,‘ are pop culture terms that have become symbolic of the choice between blissful ignorance (blue) and embracing the sometimes-painful truth of reality (red). It’s time for America to take the red pill and wake up from the fog of apathy.

Freedom Is Just Another Word...
JUSTICE FOR RAYMOND

Sudden, unexplained, unattended death and a families search for answers

Dedicated to freedom in our lifetimes

News You May Have Missed

News you need to know to stay informed

Making the web a better place

Give me Liberty, Or Give me Death!

Sucking the money from it's citizens as a vampire sucks blood from it's victims. A BPI site

All wound up about politics, history, culture... lots of stuff.

“I hope we once again have reminded people that man is not free unless government is limited. There’s a clear cause and effect here that is as neat and predictable as a law of physics: as government expands, liberty contracts.” Ronald Reagan.

WHENEVER ANY FORM OF GOVERNMENT BECOMES DESTRUCTIVE OF THESE ENDS (LIFE,LIBERTY,AND THE PURSUIT OF HAPPINESS) IT IS THE RIGHT OF THE PEOPLE TO ALTER OR ABOLISH IT, AND TO INSTITUTE A NEW GOVERNMENT...

Weapons-grade blogging; quips, quotes and comments 'cause we live in a world gone mad.......