Welcome and thank you for stopping by. Please be aware and advised, this is a CONSERVATIVE BLOG. Here is some information and my rules:

2) Conservatives have the voice of reason on my blog;

3) I will delete any comments that are abusive, non-related to the “blog theme” and not debated in a civil manner;

4) I welcome input from all walks of life. However, this is my blog and I will make the “ultimate” decision on any/all comments.

I encourage “civil” discussion. We may not agree on “ideology”. However, we can agree on “respect” and at least listening to different perspectives. Thank you for visiting!

This is a Reblogged from http://www.reuters.com. 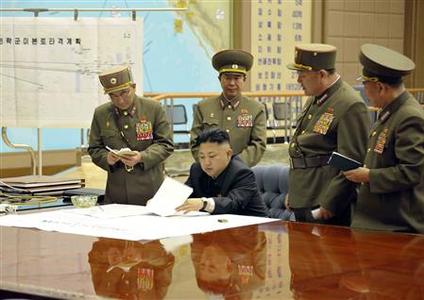 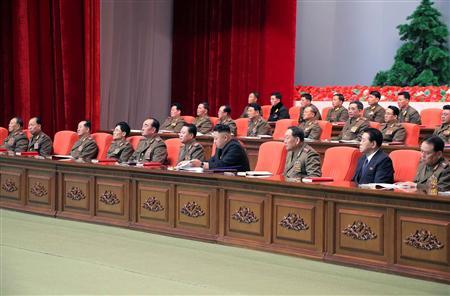 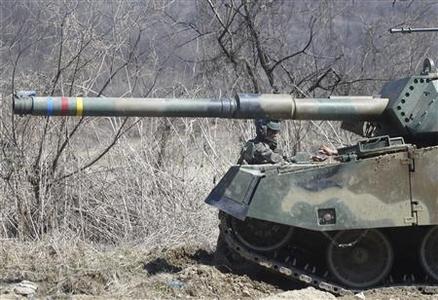 (Reuters) – North Korea said on Saturday it was entering a “state of war” with South Korea, but Seoul and its ally the United States played down the statement as tough talk.

Pyongyang also threatened to close a border industrial zone, the last remaining example of inter-Korean cooperation which gives the impoverished North access to $2 billion in trade a year.

The United States said it took Pyongyang’s threats seriously but cautioned that the North had a history of bellicose rhetoric. Russia, another a permanent U.N. Security Council member, urged all sides to show restraint.

Tensions have been high since the North’s new young leader Kim Jong-un ordered a third nuclear weapons test in February, breaching U.N. sanctions and ignoring warnings from North Korea’s sole major ally,China, not to do so.

“From this time on, the North-South relations will be entering the state of war and all issues raised between the North and the South will be handled accordingly,” a statement carried by the North’s official KCNA news agency said.

KCNA said the statement was issued jointly by the North’s government, ruling party and other organizations.

The Seoul government said there was nothing in the North’s latest statement to cause particular alarm.

“North Korea’s statement today … is not a new threat but is the continuation of provocative threats,” the South’s Unification Ministry, which handles political ties with the North, said in a statement.

On Friday, Kim signed an order putting the North’s missile units on standby to attack U.S. military bases in South Korea and the Pacific, after the United States flew two nuclear-capable stealth bombers over the Korean peninsula in a rare show of force.

U.S. officials described the flight as a diplomatic sortie aimed at reassuring allies South Korea and Japan, and at trying to nudge Pyongyang back to nuclear talks, though there was no guarantee Kim Jong-un would get the message as intended.

The two Koreas have been technically in a state of war since a truce that ended their 1950-53 conflict. Despite its threats, few people see any indication Pyongyang will risk a near-certain defeat by re-starting full-scale war.

There was no sign of unusual activity in the North’s military to suggest an imminent aggression, a South Korean defense ministry official said.

Russia, which has often balanced criticism of North Korea, a Soviet-era client state, with calls on the United States and South Korea to refrain from belligerent actions, said a recurrence of war was unacceptable.

“We hope that all parties will exercise maximum responsibility and restraint and no-one will cross the point of no return,” Grigory Logvinov, a senior Russian Foreign Ministry official, told Interfax news agency.

France said it was deeply worried about the situation on the Korean peninsula while NATO Deputy Secretary General Alexander Vershbow said the alliance hoped “that this is more posturing than a prelude to any armed hostilities.”

China has repeatedly called for restraint on the peninsula.

The North has been threatening to attack the South and U.S. military bases almost on a daily basis since the beginning of March, when U.S. and South Korean militaries started routine drills that have been conducted for decades without incident.

Many in the South have regarded the North’s willingness to keep open the Kaesong industrial zone, located just a few miles (km) north of the heavily-militarized border, as a sign that Pyongyang will not risk losing a lucrative source of foreign currency by mounting a real act of aggression.

The Kaesong zone is a vital source of hard currency for the North and hundreds of South Korean workers and vehicles enter daily after crossing the armed border.

“If the puppet traitor group continues to mention the Kaesong industrial zone is being kept operating and damages our dignity, it will be mercilessly shut off and shut down,” KCNA quoted an agency that operates Kaesong as saying in a statement.

Closure could also trap hundreds of South Korean workers and managers of the more than 100 firms that have factories there.

The North has previously suspended operations at the factory zone at the height of political tensions with the South, only to let it resume operations later.

North Korea has canceled an armistice agreement with the United States that ended the Korean War and cut all hotlines with U.S. forces, the United Nations and South Korea.

News and Opinions From Inside China

PoliticalShort
My Opinion My Vote

The greatest WordPress.com site in all the land!

The ‘red pill’ and its opposite, ‘blue pill,‘ are pop culture terms that have become symbolic of the choice between blissful ignorance (blue) and embracing the sometimes-painful truth of reality (red). It’s time for America to take the red pill and wake up from the fog of apathy.

Freedom Is Just Another Word...
JUSTICE FOR RAYMOND

Sudden, unexplained, unattended death and a families search for answers

Dedicated to freedom in our lifetimes

News You May Have Missed

News you need to know to stay informed

Making the web a better place

Give me Liberty, Or Give me Death!

Sucking the money from it's citizens as a vampire sucks blood from it's victims. A BPI site

All wound up about politics, history, culture... lots of stuff.

“I hope we once again have reminded people that man is not free unless government is limited. There’s a clear cause and effect here that is as neat and predictable as a law of physics: as government expands, liberty contracts.” Ronald Reagan.

WHENEVER ANY FORM OF GOVERNMENT BECOMES DESTRUCTIVE OF THESE ENDS (LIFE,LIBERTY,AND THE PURSUIT OF HAPPINESS) IT IS THE RIGHT OF THE PEOPLE TO ALTER OR ABOLISH IT, AND TO INSTITUTE A NEW GOVERNMENT...

Weapons-grade blogging; quips, quotes and comments 'cause we live in a world gone mad.......